Some cannabis concentrate companies either grow their own or partner with growers. In either case, you can either procure fresh or dried cannabis.

This is an important choice. You can choose to partially cure the cannabis or you can use fresh flowers. what you decide will determine costs, and the amount of pre and post processing you may have after the initial extraction takes place.

Lets look at the considerations – and then I can tell you what my choice would be.

Fresh flowers are rich in volatile terpenes that have only just started their degradation process. All terpenes start to vaporize at different temperatures. The most volatile among them are what gives fresh cannabis that smell that fills a room. If you have ever been near a cannabis flower in full bloom, you know that smell I mean.

These terpenes start to boil off at around 70F. When you dry or cure cannabis, you start to lose a whole lot of terpenes that boil off at 80F-100F.

If you use fresh flowers, there will be less of a chance that any small plant material will make it into the final extract.

In order to use fresh material it is always best to flash freeze the material. This will make the trichomes more brittle and apt to separate from the plant easier.

Dried material is a know quantity. It is immediately ready for grinding and loading into the extractor. It is less bulky than fresh material and can be stored easier.

Cured material will have already started the process of converting THCA to the psychoactive THC. Which if you are creating concentrates that is not something that you are too concerned about. Because you can expose more surface area to the solvent, your yields will be a little higher than if you were using fresh flowers.

So what is my choice?

Even though you get a little bit less those volatile turpenes that get lost through drying really makes the taste of the final extract change, my choice would be to use fresh flowers that have been flash frozen within 24hrs of harvest.

Because 80% THC wasn’t enough, the extract chemists have figured out a way to remove most of the waxes, turpenes and lipids that both BHO and CO2 extractions leave behind.

It looks like kosher salt but it packs a wallop. This is as close to as pure THC that you can get.

If you can remove enough of  those terpenes, lipids and waxes you can selectively be left with either 99.9% pure THCA or 99.9% CBDA (based on the incoming strain characteristics).  At this purity, you get just the pure crystal structure – no terpenes at all. This is almost no perceivable taste. Producers offer a unique way to combat this criticism by basically adding a drop of the extracted turpenes back on the crystals and what I initially thought wouldn’t work made a quick believer – it does make a difference.

So how do they do this? Producers of the different products like to veil it in secrecy (that way they can increase demand) but in fact, a couple of the methods are pretty well known (one is even patented) – but they all follow the same general scientific methodology. 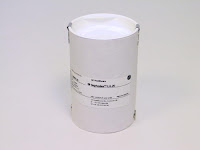 The incoming extract is about 80% pure THCA. A solvent is added to that material (in some cases hexane and acetic acid, in other cases you can use an alcohol) and then that material is filtered and put in a rotovap to get rid of the remaining solvent. At this point the material will be closer to 90% region in terms of the molecules that you are targeting which makes it easier for the next step.

The next step is to use a practice called size exclusion chromatography or as I learned it, molecular sieve chromatography. What this basically means is that you suspend your solution something that is soluble to the molecule that you are targeting – in the case of THC you have the  choice of a carrier oil or alcohol and put it through a porous material. Different molecules have different weights and will move through the porous material at different speeds. This means that we can target the exact molecular weight that we want to capture – you can use something called a Sephadex LH20 column (although there are many alternatives in the marketplace now).

Redissolve this mixture in methanol, filter the solution and rotovap to remove solvent. Redissolve this in pentane, filter and then then just a lot of rotavaping until you get crystals.

So, not really a secret but a long process – which equates out to a very costly product.

There shows promise as well in the field of dry column vacuum chromatography, which according to the author can support much higher volumes of 100 grams a day. 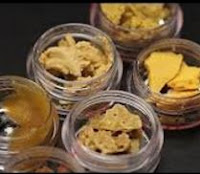